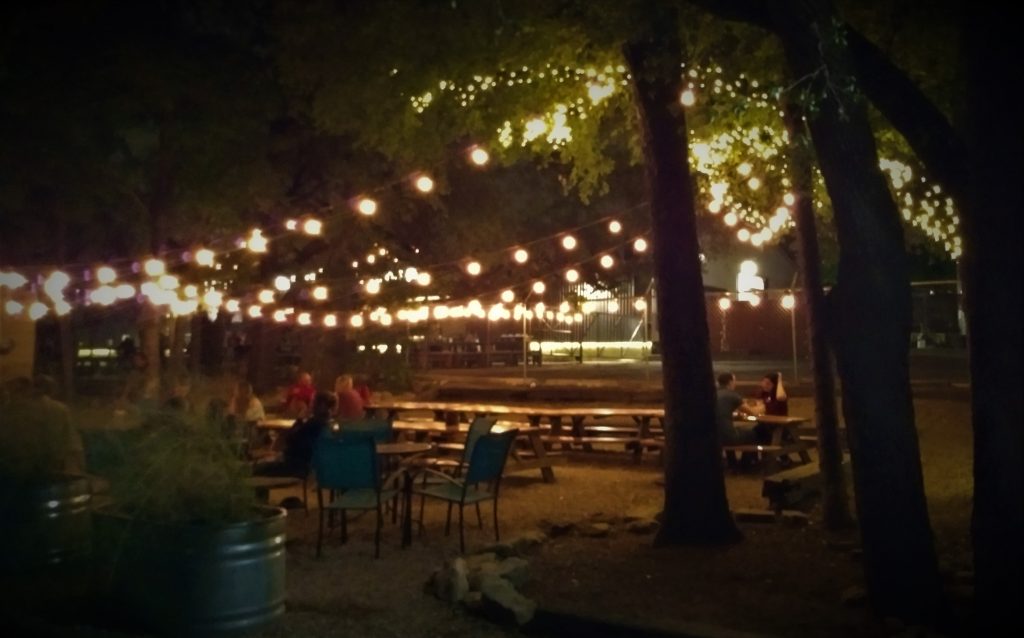 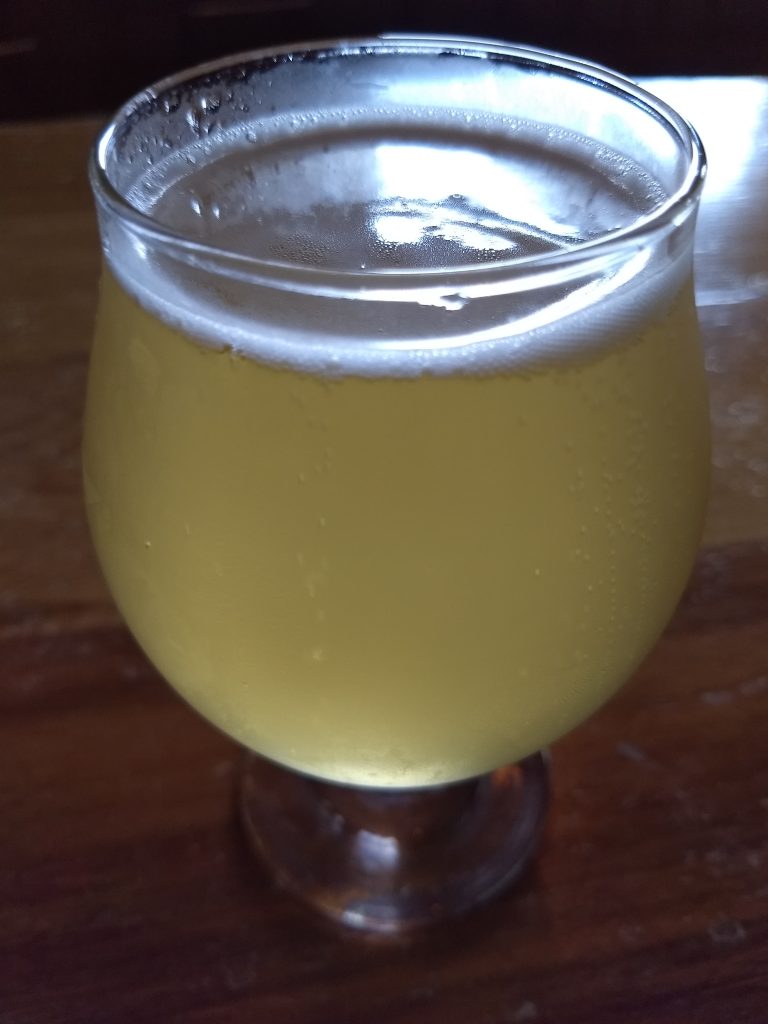 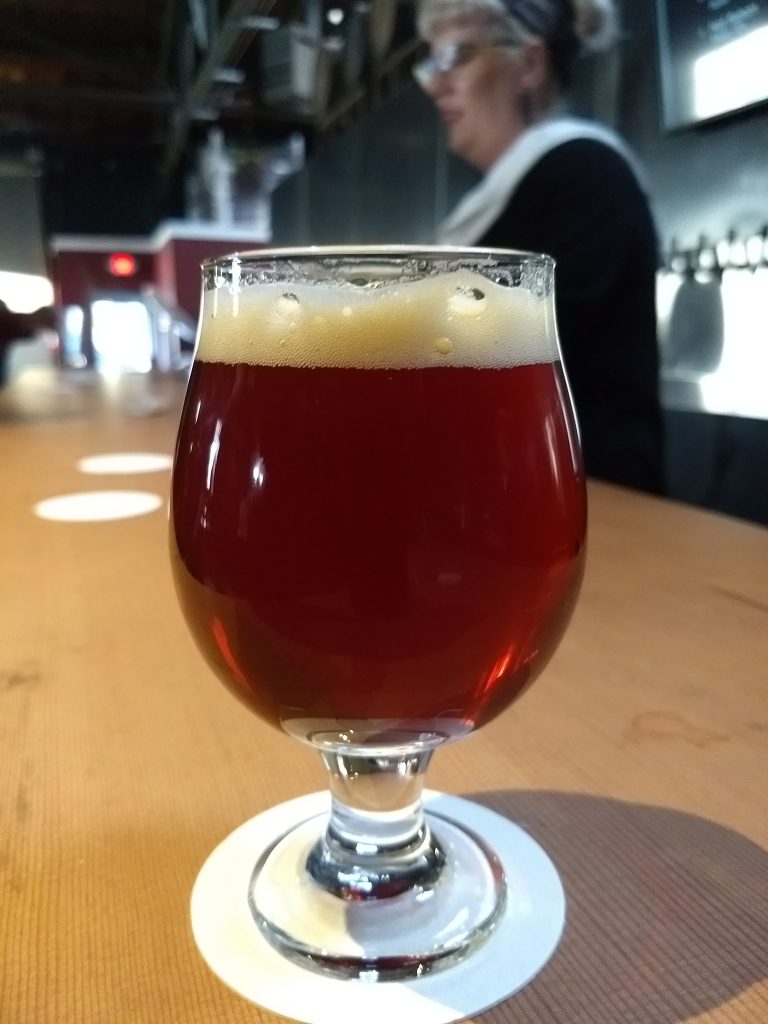 Ghost Town Brewing opens the doors to its taproom and brewery to the public tonight after a long wait and many hurdles.

I had the opportunity to visit last night at its soft opening event, and I must say the place is very nice indeed.   It is located in a large warehouse space, split roughly down the middle between the shiny 15-bbl brewhouse and assorted fermentation tanks, and the serving and public areas of the house.

Care was given to making sure the small details were not overlooked, down to having sleeves with the brewery’s logo wrapping around the table supports and coffin-shaped bike posts in one corner.  (Both, incidentally, were sourced locally from a steelworks just a couple of blocks away.)

With plenty of room at the bar, lots of seating, and a corn-hole court, the taproom is the kind of place that makes you just want to hang out. Hang out and drink beer.

As to the beers -crafted by Justin Burdt, recently of the now-closed Black Diamond Brewing Co.- are all excellent.  I tasted a fair selection of what they had on offer and there was not one that would quibble with, but I would particularly recommend asking for Lecherous Haze, a 6% NE IPA;  Melmac, a 5.5% pale ale; or Old Trepanner,  10.7% barley wine.

Last weekend I had the opportunity to check out the digs for Five Suns Brewing in downtown Martinez (California). 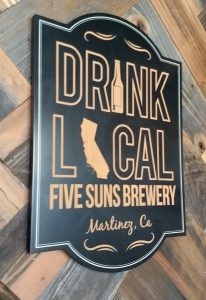 Five Suns is the brainchild of five friends (though I think a couple of ’em might be brothers) who decided to open a brewery together. By putting in a great deal of “sweat equity” into their space they’ve managed to put together what is already a pleasant, welcoming, comfy-feeling place, with a nice bar, vintage sofas paired with modern tables, set in a modern “industrial” space with pleasing interplay between cement, wood, old brick work, and exposed pipes.

They are set up as a 3-bbl. nano brewery, and the plan is to initially be open only on weekends (I presume that means Fri. evening through Sunday), until they can develop enough of a following to be able to afford to increase their brewing capacity.

A big regulatory hurdle has been surpassed with the granting of their ABC license this week, which clears the way for Five Suns to produce and sell beer on premises. Other local and state permits still need to be cleared, however.  Thus, an opening date has not been set –they wouldn’t even speculate on it– but the owners told me they expected to launch some soft-opening events for friends and backers early in the coming year.

Well, it has been quite a while since I posted anything.   I got sick and then busy, what with Thanksgiving thrown in there and a few other things. Pretty much all fun (except for the being sick part) but they kept me busy.

I did have a couple of posts in mind, both on beer fests. One, noting that the Great American Beer Festival (GABF), America’s largest commercial beer festival, had taken place in Colorado. Though I didn’t go, I was enthused because my friend Matt Sager won a bronze medal for the Danville Brewing Co. with Chux DIPA. The other was a note on Lima Beer Week, which was taking place at the same time.

In any case, I missed the window of opportunity and both events are now long over and done.

What is not done and over with is that Concord’s Black Diamond Brewing Company remains shuttered. Apparently for good.

An October 17th post (since deleted) on their Facebook page showed an image taken of a sign taped to their door, which employees reportedly found when they showed up to work that morning:

Due to unfortunate circumstances the locks have been changed and Black Diamond Brewery is closed for the foreseeable future. Thank you to everyone who supported us during our 23 year run!

Naturally, that led to speculation -since confirmed- that the company was bankrupt.

As things stand now, the doors remain shut and the website is gone.

I had a bit of a soft spot for Black Diamond.  Not only was it a longstanding local brewery, but it was, in fact, the first brewpub I ever went to.  That was back in their original location at the former Cadillac dealership building in Walnut Creek, with it’s long curving bank of huge windows, which beautifully framed the brewhouse.  The food was good as well and it became an early favorite spot for a “date night” without the kids.

After a bit, the restaurant and brewpub closed, and though I started to see Black Diamond beers in stores, I lost track of the brewery for a number of years.

Then, through friends in my home brewing club, I found out that the brewery was in Concord and that it had an attached tap room. Since then, I enjoyed many an event there and got to see how much Black Diamond gave back to the community.

Everyone I met who worked there was really nice and generous. It sucks how the closure went down, and I just hope that they were all taken care of and were able to land back on their feet. 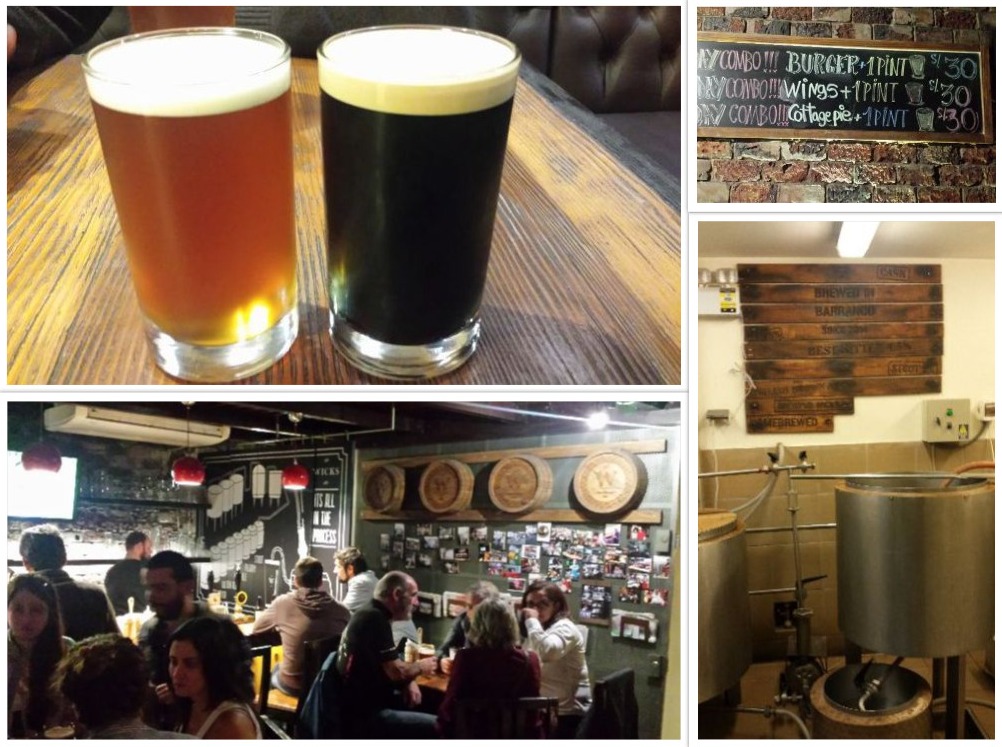