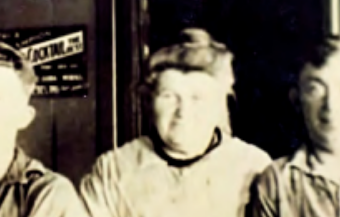 In the middle of the southern portion of San Francisco Bay in California sits the ghost town of Drawbridge. Now quietly sinking into the mud of the bay’s tidal flats, Drawbridge was once a vibrant little community full of colorful characters.

A collection of dwellings that grew up spontaneously around the South Pacific Coast Railway’s moveable bridge operator’s cabin in the 1880s, Drawbridge was made an official stop on railway in the 1890s. At its peak, in 1928, it had 90 dwellings, all built on stilts and connected by walkways and by boat, as well as no town government or police, which led to rumors of unsavory activity in the town.

Nonetheless, Drawbridge was a popular retreat for hunters and fishermen. Guests stayed at a couple of hotels in town. One of them, the Sprung Hotel, was run by a German immigrant couple: Joe and Hedwig Sprung.

Joe and Hedwig opened the hotel together in 1905, but is likely that Joe died less than a decade later, as the hotel was deeded to Hedwig in November, 1914.

The Sprung Hotel had its own well, and the Sprungs sold clean water to their neighbors for $5 per year. At the hotel, Hedwig served duck dinners for 35¢. When the rooms were full, she rented out her own bed and slept in the bathtub.

When Prohibition became the law of the land, and alcohol supplies dried up, Hedwig started (or perhaps continued) brewing her own dark beer, which she sold to neighbors and visitors out of the Sprung Hotel’s saloon for 25¢.

Hedwig ran the Sprung Hotel until 1926, when she deeded it to Ike Oswald, another Drawbrige resident and husband to her niece.