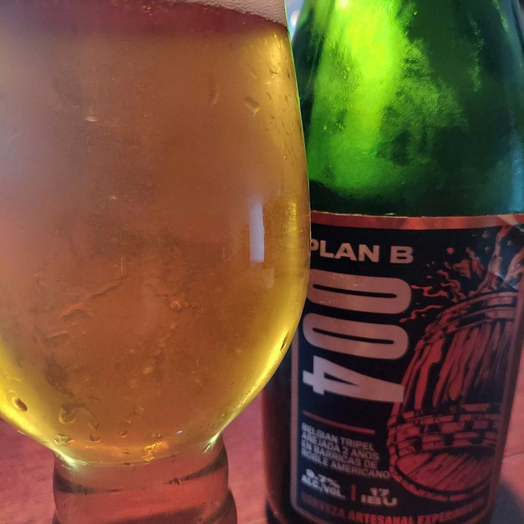 Plan B is a series of special-production “experimental craft beers” beers released once a year in large-format 750 ml bottles by Lima’s Cervecería Barbarian. In this post I review Barbarian’s 2020 release, Plan B 004.

Plan B 004, released on 21 December 2020, is a Belgian-style tripel made by innoculating a batch of Barbarian’s Belga Pa’ Ti Belgian Tripel with Brettanomyces yeast and letting it age in barrels of American oak for “more than 2 years”. (So, in addition to that, it has spent a further year in the bottle, under refrigeration.)

The result is a 9.7% abv, 17 IBU, golden-colored ale, with a slight reddish tinge, that presents with a moderate head, and “Belgiany” aromas of light bubblegum, orange peel, and spices -maybe some coriander, nutmeg- upon pouring.

It is crisp, and moderately effervescent, and offers a dry mouthfeel and finish. In flavor, it is offers predominantly citrus -grapefruit or pomelo- backed by a light, pleasant hop bitterness.

Plan B 004 is not overly sour. It is certainly not as sour as some sour beers we might be accustomed to by now in North America, but sourness is definitely present. It is however, very pleasant and, I’d say, at a level appropriate to the Peruvian market.

The expected Brett funk is there as well, but also at a moderate level, combining very effectively, and pleasingly, with the “Belgian” flavor notes of the base style.

I expect that the “Barbarians” -as the the brewery’s founding trio, Ignacio Schwalb, Juan Diego Vásquez, and Diego Rodríguez, are collectively nicknamed in Lima- are justly pleased with how well it turned out. This is not only because of the time invested in production, but also as Plan B 004 marks a departure from their previous preference for American styles as the base beer.