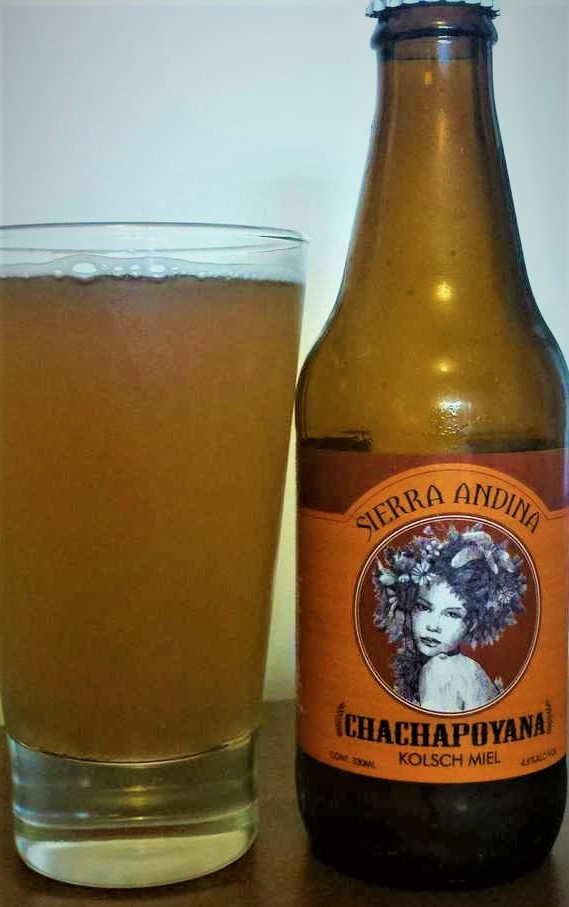 Sierra Andina is a craft brewery from the northern Peruvian Andean city of Huaráz, situated at 10,000 feet above sea level and near the foot of Mt Huascarán, which rises a further 12,00 feet from the valley floor.

In the past Sierra Andina has harkened to that Andean setting for the names and styles of their beers —Don Juan Porter, Pachacuti Imperial Ale, and so on– but this time I am trying a beer for which they have reached beyond the mountains, to the high jungles of Chachapoyas, at the edge of the Amazon basin.

Chachapoyana is a of a yellow, golden color (4-6 SRM, I figure) beer; fairly hazy, but not thoroughly opaque. It has a medium but longlasting effervescence, with “strings of pearls” rising from the bottom for quite a while after serving.

In the nose, the honey addition is evident. There is a slight jora smell as well. In flavor, it is slightly fruity, but I can’t pick out any specific fruits. There is also a teeny tiny tang in the background.

It finishes effervescent, with a very slight mineral finish at the very end, as the beer passes the throat, that you’ll appreciate if you’re a fan of mineral water.

Chachapoyana is light, crisp, and refreshing, as is befitting of a kölsch. This beer goes down very easily.