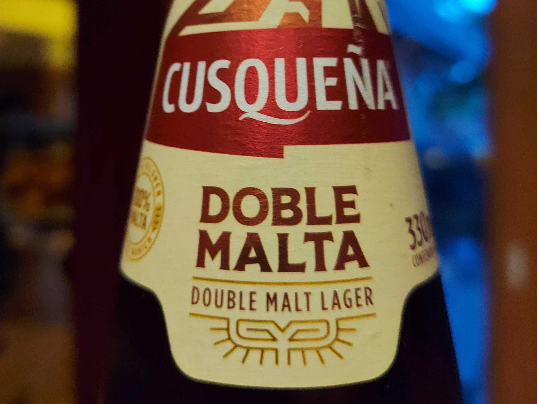 The launch was accompanied by the adpeople’s best hype. The announcements implied that Cusqueña’s brewers had accomplished something never done before: the “impossible mixture of two premium malts.” That, of course, is absolute bunk, but nonetheless, I decided to give the brew a try.

Cusqueña Doble Malta is a nice, clean lager with classic European noble hops. It is brewed from Pilsner and Munich malts. The beer comes in at 5% abv and 20 IBUs. I’ve not been able to find any mention of which hops are used, but Cusqueña’s flagship beer Cusqueña Dorada lager is brewed with Saaz hops so it it’s not unreasonable to conclude that they may play a part in Doble Malta as well.

It has pretty much the same European noble hop aroma as the others. In color it is a bit darker than the Dorada (Golden) lager, and is extremely clear and clean. It has a bit more body than regular Cusqueña, and is maybe a tad sweeter as well, with a bit of a bready maltiness.

Doble Malta is actually pretty enjoyable. As a rule, of the Peruvian macrobrews, I am partial to the Cusqueña line, but Doble Malta is a stand-out amongst them.