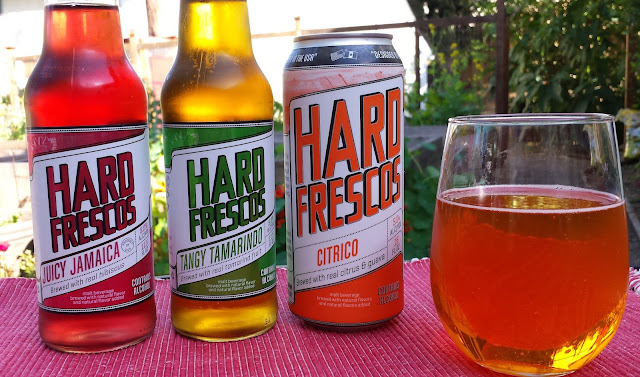 Hard Frescos are a relatively new item, having been on the market for about a year.  They are the brain-child of Peter Stearns, from Santa Barbara, who worked for two years with experts at UC Davis to develop a way of making an alcoholic drink using pretty much only the ingredients that would go into Mexican aguas frescas, which were his inspiration.

Now, a “serious” beer drinker might well look at these and decide that they have no relation to beer, and that’s a fair point. However, as they are brewed using fruit and then fermented using an ale or a lager yeast, depending on the batch, they have as much a relation to beer as a cider or a mead. In any case, the federal government has required the company to include some barley malt in all the recipes so they can class Hard Frescos as a “malt beverage.”

I happened to met Stearns at the Hard Frescos booth at the recent Bay Area Craft Brew Festival, and he sent me home with some samples. Well, I’ve tried every one of what he gave me and I’ve got to say that I do like them.

Served cold, Hard Frescos are easy to drink and refreshing. All of the flavors contain around 5% ABV, but what comes through most brightly is the fruit used in their preparation. The adjectives that most come to mind are fun and friendly.

As they are a bit removed from the Belgian and farmhouse ales that I tend to prefer, I’m not sure that I’d stock them in my fridge –although they do hold out the promise of some interesting cocktails– but I’d happily order a Hard Frescos at a restaurant or taco truck.

They would certainly hit the spot as a “grown up” alternative any time one might reach for a Jarritos or a Peñafiel.