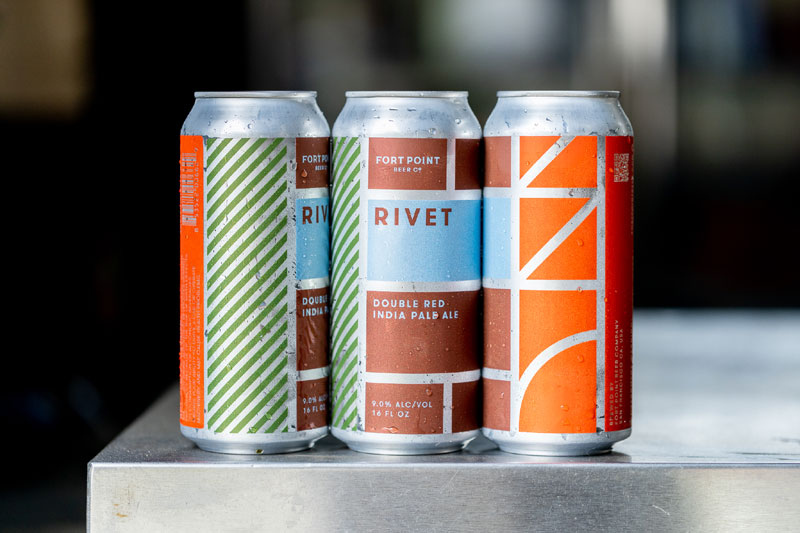 Rivet, named after the thousands of hand-placed rivets that hold the Golden Gate Bridge together, is the second in Fort Point’s Limited Release series of one-and-done beers. The 9% abv, 75 IBUs red DIPA was released on June 3rd, and I am reviewing it based on samples sent to me by the brewery.

Rivet is brewed with 2-row barley, roasted barley, Red X and Crystal 60°L barley malts, and dextrose, and is hopped with Chinook, Mosaic, and Amarillo hops.

In the glass, Rivet raises a prominent head upon pouring, which soon subsides, leaving lacing and a ring of variously-sized bubbles around the sides of the glass. It is a very clear and clean-looking beer, characterized by a nice red color thanks to those Red X and Crystal 60 malts. It offers a pleasant malty aroma, with notes slightly of tangerine peel, and of molasses or dark brown sugar.

The overall taste impression is of caramel with a little tangerine and more prominent grapefruit, and a little pine at the back end. One is also, definitely and appropriately, presented with a hoppy bitterness right up front, but which is not overpowering.

Rivet is medium-bodied, even for a DIPA. It is not overtly sweet but the residual sugar is noticeable, but is well balanced against the bitterness provided by the hops. In the aftertaste there is a bitterness that reminded me of the bitter pith of a lime, but I didn’t find it off-putting.

According to Fort Point’s blurb, Rivet is “a nod to the glory days before beers were hazy.” It is definitely not hazy, and despite being a double IPA Rivet is definitely not a hop-bomb but more more of an old school West Coast IPA in that regard; more in line with what we were drinking in the 1990s or 2000s.