One of my destinations in North Carolina –a recommendation from Susana– was the Raleigh Beer Garden, on Glenwood Avenue in downtown Raleigh.

The Beer Garden, rather than a garden, is actually a three-story affair, with three regular bars, which are expanded on weekends with a draft setup on the rooftop patio. 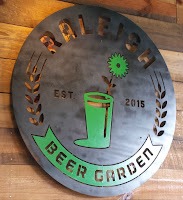 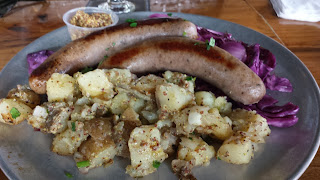 One of the bars is the liquor and cocktail bar near the entrance. It is a pretty cool affair in its own right, dominated by a sculpture made out of a real tree which towers into the second floor.

Toward the back of the first and second floors are the beer taprooms. The Raleigh Beer Garden claims to offer the world’s largest selection of draft beer, and they have the Guinness World Record certificates to prove it. 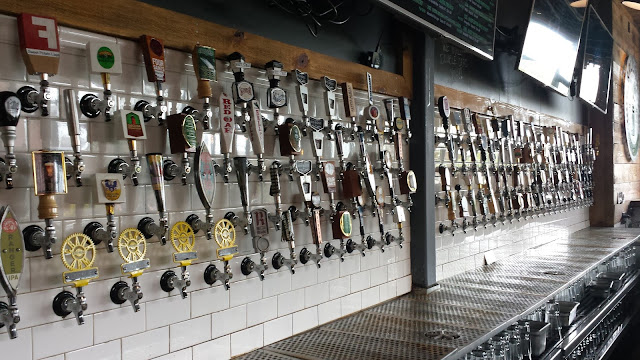 Even without the certificates the claim is easy to believe. Altogether there are 378 taps, of which the 144 on the first floor are all North Carolina beers, while the second floor bar serves beers from elsewhere in the country and imports. If you’re in the Raleigh area and don’t have time for a local beer crawl, then definitely hit the Raleigh Beer Garden.

With a beer selection so vast, actually pretty good food, patio seating and a rooftop bar and patio, it is easy to understand why the Raleigh Beer Garden is a very popular spot. We went on a weekday afternoon, and I recommend that. As I understand it, from 4 pm on on Thursday and Friday evenings, and on the weekends, the place is gets packed with the college crowd (which, of course, can be a totally fun scene in its own right!) and it can be hard to get in without a reservation.