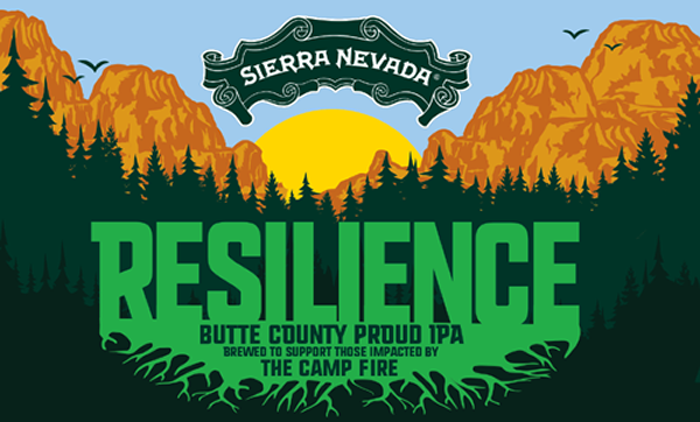 In response to the terrible Camp Fire in northern California, which has destroyed thousands of homes and leveled entire communities -continues to burn as this is written- Sierra Nevada Brewing Company stepped forward with a proposal to brew a beer and donate all sales to fire victim relief efforts.

This time, Sierra Nevada’s founder and CEO, Ken Grossman got the ball rolling with this message on Facebook:

Many of you have asked if we will be brewing a fundraiser beer to support Camp Fire relief efforts. The answer is a resounding “yes.”

We are proud to announce that we’ll be brewing Resilience Butte County Proud IPA and donating 100 percent of sales to Camp Fire relief. In addition, we are also asking every brewery in America to brew Resilience and do the same.

I’m sending a letter to brewers across the country, inviting them to join us in a collaboration brew day on Tuesday, November 27. We are working with malt and hop suppliers to provide raw ingredient donations to all participating breweries and are asking those breweries to donate 100 percent of their sales, as well.

We know that the rebuilding process will take time, but we’re in this for the long haul. Our hope is to get Resilience IPA in taprooms all over the country to create a solid start for our community’s future.

Thank you to each and every one of you for your support. We’re right here with you and we’ll get through this together.

The response from the always close-knit brewing community has, of course, been tremendous and hundreds of breweries in California and further afield have signed on.

There is a growing list of participating breweries on the Sierra Nevada webpage.

In addition, the recipe for Resilience Butte County Proud IPA has been made available to homebrewers via the AHA, and homebrew supply retailer MoreBeer! may (emphasis on may) be releasing a homebrew ingredient kit.  Homebrewers, who of course cannot sell their beer, are encouraged instead to make a donation for Camp Fire relief via the Golden Valley Bank Community Foundation.