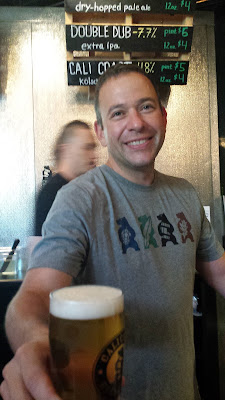 After a four-year wait, as a work-in-progress, Calicraft Brewing Company has finally opened the doors to its taproom in Walnut Creek.

The taproom was opened to the general public with a soft opening on July 29th.

When I got there, half an hour after opening, the line snaked through the room, and when I left a couple of hours later it was still to the door, with a steady stream of new visitors coming in.

Throughout it all, owner and head brewer, Blaine Landberg, circulated, greeting guests, distributing samples, and helping everyone feel welcome.

The beer was certainly very good, as was to be expected from a brewer with so strong a presence in the local market and beyond.

Of course, Calicraft’s flagship brews -Buzzerkley, Oaktown, The City, Cali Coast– were well-represented on the tap list. However, there were also a number of other treats, including a fruit-infused version of Buzzerkley, and a whiskey barrel-aged edition of Oaktown.

Particularly nice were a special sour beer fermented in a zinfandel barrel, and Zero Anniversary, a pale ale brewed specially for opening weekend.

According to Blaine’s parents, who were also on hand, there are long-range plans of adding a deck out front, with maybe a bocce ball court. Food options are still under evaluation.