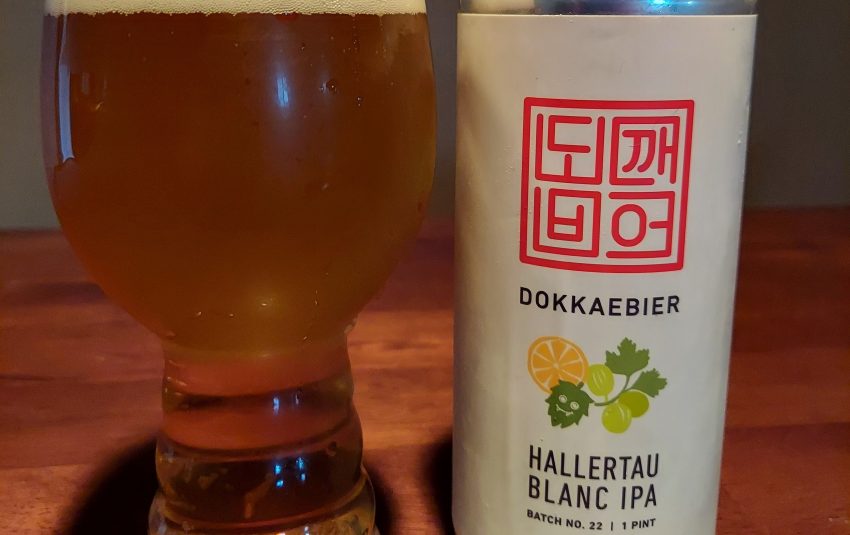 For a lat-in-the-day International Beer Day, and belated IPA Day, post we are taking a look at Dokkaebier’s Hallertau Blanc IPA (Batch #22).

Dokkaebier is an “Asian inspired” craft brewery based in San Francisco. From what I understand, it does not have a physical plant of its own, but rather, brewer and founder Youngwon Lee hires brewery and fermentation space from other brewers. Even with the difficulties to be sorted due to the panemic, his beers have been causing quite a sensation since Dokkabier was launched in February 2020.

When poured, the beer produces an impressive, large white head, that is thick without being rocky. The liquid itself is a darkish gold color, tending toward orange.

In the nose one is presented with a pleasant floral aroma, with roses predominating, as well as notes of white grapes and citrus peel -to my perception, something in between mandarin and kumquat.

There is a slight piney flavor –despite there not being any pine notes in the aroma– up front when drunk, with a bit of sweetness to balance. That gives way to a mouthfeel and flavor notes of mango and apricot, which I really liked.

The draught ends with a lingering grapefruity bitterness. Hallertau Blanc IPA is crisp, without being overly carbonated. It is smooth, and refreshing overall.